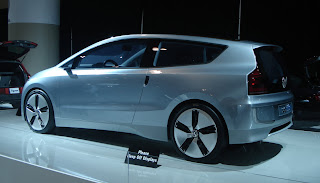 As I didn’t manage to post a good auto show review from Detroit, I’d thought I’d head over to the Toronto Convention Centre to check out the rides at the Canadian International Auto Show. I should start off by saying that this event is really more of a local dealer show than a major car happening. Without a real automotive industry in this country I guess it’s all that we can expect. However, it does give Torontonians a chance to see the latest and upcoming hardware and even look at a few recent (as in 1 to 2 years old) prototype vehicles.

There were some standouts for me. The Infiniti Essense concept was superb. Its graceful shapes and unique bulging beltline stopped many visitors for a closer look. As well, the Lincoln Concept C was a great vision for an upscale small car. Its futuristic interior in white with polished aluminum accents was beautiful. On the other hand the much anticipated Honda CR-Z hybrid sportscar disappointed. Somehow, the body just doesn’t hang together well and I find the front overhang makes the car look heavy. The forms seem mismatched. There are organic bits mixed with tighter tense lines. The mashup doesn’t play very well.

Two vehicles though illustrate how to and how not to dream up cars. The Volkwagen Up Lite concept was my favourite vehicle in the show. This concept for an ultra-high mileage automobile is functional and also very sophisticated. The simple shape has aerodynamics in mind yet it doesn’t bore the viewer as many low air drag vehicles do. There is no homage to ugly anatomical aero-shapes. The lines are crisp and they interrupt the two box design in the right places. I love how they tapered the roofline for low drag not only in the side elevation but the plan view also.

From the sublime we travel to the ridiculous. When I mentioned in the first paragraph that Canada doesn’t have a real car industry I meant it. Tucked away in a corner of the show was some good ole CanCon. The Plethore is Canada’s Supercar that begs the question, why do we need a supercar? While car companies around the world are trying to reduce fuel consumption, this Quebec-based enterprise is trying to take on the Bugatti Veyron. This car was the opposite of the Up Lite not only in purpose but in looks. It truly is a plethora of design details. I see styling hints from Ferrari, McLaren and Peugeot and this mélange is not pretty. The front view looks like a cartoon villain saying “can I look meaner”. It’s really too bad that all this great engineering went into a fuel burner that few people can own rather than an intelligent transportation solution that this over-polluted planet is in dire need of.

Photo: VW Up Lite
Posted by Davide Tonizzo at 16:04