So you’ve just got off a flight from Paris, before which you’ve traversed the Altantic in a 747. You’re exhausted and hungry but in Rome and you have a few hours to take part in a design pilgrimage. So where to? The Colloseum, the Forum, maybe gaze at some Bernini sculpture? Hmmm, maybe not. 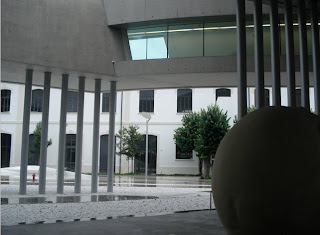 Instead we decided to look at Roman architecture through a slightly more recent perspective and headed for the Maxxi. This is Rome’s latest art gallery. The acronym stands for Museo Nazionale delle Arti del XXI Secolo (National Museum of 21th Century Art).

A pilgrimage is supposed to be grueling on the pilgrims. This was no exception. One must suffer for good design. After a quick lunch of delicious foccaccia and pizza on a busy street in Trastevere under a solid rain shower, we attempted to navigate Rome’s transit system and find our way to the museum. Armed with our plasticized (laminated) map bought at the edicola (newsstand) we began boarding trams and buses, usually the wrong ones. After enduring what became known as the Termini crush (the Termini rail station’s metro stop is currently under renovation and commuters are hoarded through a narrow tunnel not designed to handle this many people) we were only one bus ride away from Zaha Hadid’s new art gallery. 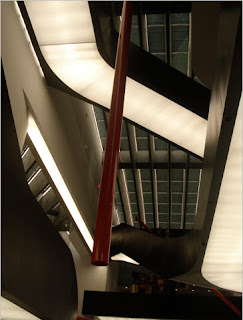 We took the right bus this time but in the wrong direction and had to go to its terminus and wait in the cold for the bus to turn around and head the right way. Stop after stop more and more people piled into the vehicle and at one point a Roman gentlemen’s derrier was basically on my lap. But we endevoured on. Finally, after a journey that began almost two hours earlier, we were nearly there. 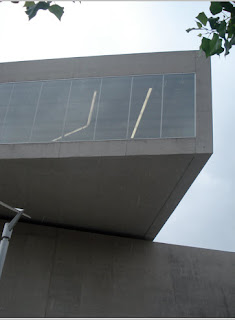 Of course as we walked the final leg, the rain kept coming down and as the air got damper and colder, we became wetter and more fatigued. When would this martyrdom end? After a few blocks through a non-descript north-Roman neighbourhood, we sighted the sign for the Maxxi. Through a concrete wall and there in idyllic quiet of a Roman suburb we had our reward. It was indeed design paradise. The smooth grey concrete blended beautifully with its surroundings and it seemed that this building, opened only a few months prior, had been there forever. Its modern oblique prisms and curves though different in design to its architectural neighbours, were a thoughtful and subtle contrast.

Inside, Zaha’s flowing superhighways of form were omnipresent. Stairways snaked and gleamed in the vast concrete foyer. The shapes were magnificent and the illuminated undertrays of the stairscases filled the hall with perfectly diffused light. Here and there the grayness was interrupted by long red columns hung in the airspace at various angles with magenta coloured light spewing out from the ends. 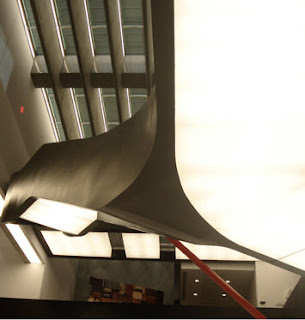 We stood there in awe and knowing that the arduous journey was totally worth it.