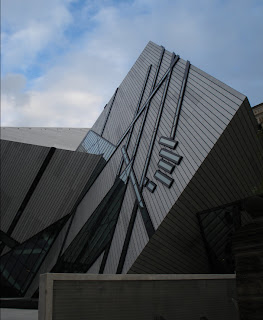 The Washington Post called the Royal Ontario Museum’s Michael Lee-Chin Crystal the worst single piece of architecture of the past decade. Certainly, the museum’s addition has stimulated mixed reviews. So it’s not surprising that yet again, it has been trashed.

However, I believe that a building needs to be judged in its context, the context here being our city. Toronto is hardly a place full of avant-garde architecture. Anyone notice what usually gets built around here? Terribly proportioned, over decorated, pseudo-renaissance-victorian-art deco mashups. Hello people. The ROM actually had the sense to stage an international design competition for a “modern” building. That deserves credit in itself.

Yes, we do get the odd piece of contempory design, but the so-called “Toronto school of architecture” puts up the same fare year after year. The solutions are so predictable that one would think a chain store was behind them. I’ll agree that Daniel Libeskind’s Crystal has some shoddy detailing and from some angles it’s not that pretty. However, it’s a welcome change from the boring glass, steel and wood packing crates we usually get.

In a society where discussion about design of any kind is non-existent, the ROM extension got designers and non-designers talking about architecture and that’s a positive thing.

Lastly, Toronto is a diverse city. It is one of the few truly pluralistic societies on the planet. Shouldn’t that be characterized by its buildings. Modernist rectangular prisms executed by the city’s top practitioners are great and important works to have in this city. But should they be the only works? We need different types of architectural solutions and the Crystal’s deconstructivist theme is a fantastic foil to the other contemporary buildings.

In Toronto, there is no courage to adopt the solutions that we need to make our city better. Let’s at minimum not trash those daring enough to make our city a bit more visually exciting.
Posted by Davide Tonizzo at 11:47