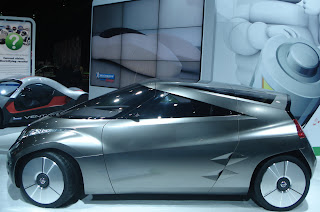 The North American International Auto Show (NAIAS) has always eluded me. Every year I ponder doing the three and a half hour drive to Detroit to take in one of the world’ largest car exhibitions. But as sure as the sky is blue I never go because of the unpredictable January weather. Until this year and alas, the auto show has eluded me again.

Here’s my adventure. Yes, I did make it to Detroit but did I see any of the many concept vehicles? Well, let’s just say that my losing streak continues. I ventured to Motown with two objectives. Firstly, business, to meet some of the startup companies in the Electric Avenue segment of the show. Finally, in the new era of the ecological revolution, the powers that be at NAIAS have decided to dedicate a sizable portion of the exhibition to low emission cars. Secondly, I went for leisure, to check out the latest concept cars and new production vehicles making their debut in Detroit.

As I shook the hand of the last prospective business contact I had made at Electric Avenue, an announcement on the PA system asked all attendees and exhibitors to evacuate the show floor because a fire had broken out. I thought the incident could not be serious as they asked people to walk at a normal pace toward the nearest exit. I assumed surely they can douse these little flames quickly and get back to business as usual before I’m even halfway to the door. So I casually sauntered out trying to check out as many automobiles as possible thinking, yeah whatever, fire shmire. That was until I saw the smoke, a lot of smoke and I began to smell something serious getting over-roasted by the Audi booth.

Needless to say, it was a fairly large burner. After thirty minutes in the lobby they announced the show would reopen in two hours. That later got updated to two and half hours and then finally to three and a half, at which point I decided to keep my record intact and not see the Detroit Autoshow again eventhough I actually went to Detroit.

What I can report is that there were many startup companies showing electric or high mileage vehicles in Electric Avenue. There seem to be two camps, the enterprises that have used designers to style the vehicles and the others who created cars out of engineering studies. While the latter vehicles are definitely interesting technically, I wonder how well they will capture the public’s desire to purchase them. Will these vehicles show up to the showroom and never walk out the door. Will they go to the eco-party but never get asked to dance? Will these cars never do the good work they were meant to do? Will success elude them as the North American International Auto Show eludes me?
Posted by Davide Tonizzo at 20:57