A Matter of Process: CargoMAX600 Part 2 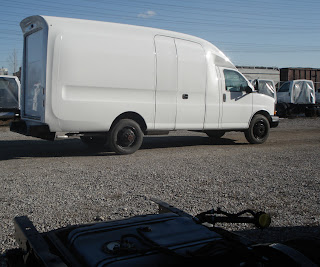 So how does a designer find a solution? Well, there’s no straight forward way to achieve this. Light bulbs just don’t turn on. And sometimes the harder you try the worse the outcome. The CargoMAX 600 certainly posed a challenge. The more I sketched, the more frustrated I became. By Sunday midnight, all I had were some very pedestrian designs, things that any competitor could envision. I needed something unique. After two full days of freehand drawing, scaled side views and long thinking sessions, I was nowhere closer to a design than I was on Friday. Time was running out quickly. I needed something to show the manufacturer by Monday morning at 8.30.

Finally at 4am, I caught a glimpse of the vision. By creating a protruding feature line that grew gently out of the front of the cabin and then got more pronounced as it moved backward, I could retain a consistent width of the narrower cabin all through the roofline. This was important in creating a dominant “core”. A core is rounded corner between two principle surfaces and they are particularly important in automobile design to establish volumes. This core would define the vehicle as being tall and narrow like the Sprinter. The feature line which I called Line “D”, would break from the volume created by the core and establish the wider cargo volume. Also, it would visually slim the side view and create a sleeker look.

With this thought sketched out, I retired to a couple of hours of sleep. Early Monday morning I was back at the drawing board. Armed with a refreshing nap and a huge sense of relief that I’d found the magic styling bean, I set out to finish the rough design. At 8.30, I scanned my sketches and emailed them to my client. Approval was swift but I wasn’t out of the woods yet. We needed to put together a more formal presentation for my client’s customer by 5 pm.

Six hours to do a couple of sketches? Seems easy right? Not quite. Because of the aggressive timeline, I needed to make sure that the lines that I created were doable from a functional standpoint. Without this verification, the design could get ruined in the engineering stage. Hence, I began frantically drafting two dimensional cross sections to assure that it could work.

After a grueling afternoon session and no lunch break, I had the truck roughly worked out. Our meeting with the customer went incredibly well and we got approval to proceed.

The next six weeks were spent detailing and engineering the body. It did not change very much from the original sketch and ten weeks from that first initial idea I watched the truck motor out of the factory.